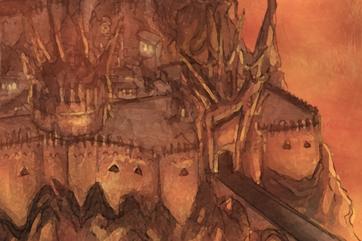 'Qapar'is one of the most frequently used terms throughout Koenig's Histories and it is one which can frequently cause confusion.   That's because the languages of the Faen (Old or Classical Faen, the High Faen used by the Athronsor Ruling Families, the dialects of the Twelve Houses, and the patois of Imperial Faen) are all tonal*, whereas Koenig was writing everything in English using the Latin alphabet.

The primary meanings for Qapar as it is occurs in

Throughout The Histories we also use the term Qapar, but wherever possible we have tried to either specify by using a clarifying noun or phrase (such as "The Qapar Empire") or by translating the word into the meaning that best fits its context (such as "The Four Worlds".)

*Tonal languages are languages such as Mandarin Chinese which can change the meaning of a phonetic word through inflection or pitch. -cjb

Among the multitude of papers and documents discovered in Elias Koenig's collection, were numerous excerpts from a variety of scholars describing the many places which The Hidden Histories themselves serve to reveal.

Koenig remarks that a significant percentage of scholars in Qapar followed in the traditions of the Faen, and were thus to some extent 'bardic' by practice and inclination.  Scholars who followed Faen traditions of learning privileged personal experience, investigation, exploration, observation and experimentation over that of library and archival research.  That is not to say that the Faen did not highly prize their libraries and archives.  Far from it.  Bluecrystal powered technologies enabled the Faen to house vast numbers of volumes in hyperspatial storehouses that seem very similar to our own capacity for digital information storage (a detail which makes Koenig, who was writing around the turn of the last century, seem remarkably prescient).  This meant that their libraries tended to be more robust than those of the other races (with whom they rarely shared such technology) by orders of magnitude.

Nevertheless, it remains true that the majority of active scholars in Qapar were in fact inveterate travelers, spending much of their careers on the move.  This gave rise to the scholarly tradition of the Gazetteer: annals of geographical observations and cultural commentary on the varied lands of Qapar and its peoples.  These itinerant scholars were not without their own prejudices and preoccupations and these necessarily provide the reader with insights that they wouldn't have had by reading histories of places written consistently by those who lived there.

NOTE:  Over the course of time, we'll continue to add new entries to this gazetteer, and it is entirely likely that there will end up being entries here that will never make it into The Histories.  Koenig's collections are quite voluminous in this regard and frequently include multiple descriptions of the same place by different scholars.  This makes for interesting reading for those wanting to delve deep into the lore of Qapar, but probably somewhat less for the typical reader.  - ijc​​

Nefyrphanx  Capital of the Northern Domains

Burendim  The Free City of Mercenaries

Urthimbar  The City of Changing Ways

Isfthid  The City of the Gods​​