The Name of the Father

Rho didn’t move.  Scanning the end of the corridor he thought he could spy two portals leading into the darkness at the hallway’s end, each surmounted by a pediment somewhat more elaborate than those which topped the other passages he had passed.  Slowly he inched forward, keeping behind the pillars, peering around them.

Was that a shape, crouched in the space where the two pediments joined?

Rho leaped backward, his heart jumping into a frenetic dance, his throat constricting in fear.  His heel caught in the groove of paving stones he had not noticed blanketing the floor, and he fell rudely on his backside.

At the corridor’s end, the gnarled little shape of a man, a contorted twist of shadows half-hidden in darkness, crouched menacingly above the two portals.  Two feeble wings protruded from its back. At Rho’s tumble, the little creature threw back its head and shrieked in malicious delight, filling the corridor with a piercing cacophony of maniacal laughter that invaded Rho’s ears and drove daggers into his spine like the grinding howls of an infant. The maelstrom of shrieking climbed in volume, building to a crescendo of discordant glee until it concluded unceremoniously in an enormous burst of flatulence.  Which was followed by a contrite squeak of surprise, silence, and then a long, impossibly low-pitched giggle that was even more menacing than the laughter.

Rho scrabbled backward on all fours like a sandcrab, his revulsion working in concert with his fear. This did not amuse the creature.

“And where do you think YOU are going, BOY?!” it shouted, in a voice that reverberated throughout the hall in a thunderous roar. In an instant, the dim light which had suffused the corridor like a gentle mist, extinguished.

And for the first time in his short life, Rho felt fear in the dark.

At first, he could hear nothing. No laughter, no giggling, no shouting broke the stillness in the dark. And then, so quiet at first that he wasn’t sure he was hearing anything, came the clicking noise of scurrying nails on stone, like the sound a giant rodent or insect might make. Although he could sense its approach, the exact direction from which it came was impossible to judge as the brittle whisper of the creature’s motion echoed crazily, like its laughter, among the walls and pillars and open spaces of the corridor. As it came closer, Rho could smell its squalid stench, feel its twisted presence approaching. The closer it came, the slower, and more circuitous was the progress it traced, until Rho began to feel as if it were anywhere and everywhere in the darkness surrounding him. He could only lay still, seized with terror, propped up on his elbows, knees bent, feet flat on the floor. Waiting.

“What’sssss the matter, boy?” came the little creature’s sibilant whisper, in a susurrus which seemed to come out of the darkness from all around him.  “Can’t follow directions?  Not the order-taking type are we?”

Then Rho could feel it on him. It was small. Only slightly larger than one of the felyxi that the cooks kept in the kitchens to hunt down mice, with claws like one too. He could feel them pricking through his breeches like needles as it slowly made its way up his leg, to perch upon his kneecap, where it paused momentarily before continuing its way up the length of Rho’s prone form. The reek of stale flatulence and unwashed sweat was overpowering as it settled on his stomach.

Again it hesitated, saying nothing.  The form which sat atop him was warm, but bony, like a miniature skeleton. This was not the soft, comforting, fastidious companionship of a domesticated felyx. Nor was it the rough, sometimes brutal, but comprehensible, gamesmanship of Rho’s young friends, whose laughter could swing suddenly from joyous to cruel, without warning. Wanton and feral as they could be, even Argys was someone that Rho could understand. Among them, anything soft, or weak, or vulnerable was an opportunity to be exploited or manipulated. The likes of Magnys or Chuelynth might not take advantage—but only because they didn’t need to.  All of the others; Martyn, certainly Argys, and yes, even Rho himself, would take any chance possible to assert their own position among the pack of boys that were the offspring of the priestesses. Perhaps it was the same amongst the other children of the tower, or perhaps, in those instances where sons and daughters always knew who their parents were, and what their future was destined to be, there was no such need to discover or establish dominance or subservience. Rho only knew what it was like for him. And he understood it.

But this was different. Even as small as he was, Rho could have picked this creature up by its leg and hurled it against the very paving stones that had tripped him up. He could have crushed its skull into jelly under his heel. But he would not do any of these things, because this small creature was a being of power. It was a thing of legend within the walls of the tower of Nefyrphanx. The Keeper of Secrets squatting atop Rho’s now unbearably nervous belly was unpredictability incarnate. It could—and did—reward or destroy at whim. And today it had chosen Rho to be his plaything.

Only now did he begin to understand why their mothers had told them never to play in the corridors beneath the halls of the silken pits, where they presided over the visitations of the faithful and ministered to their needs.  Here he had discovered the thing that Chuelynth’s senses had distantly perceived, that she could only describe as ‘wrong’.

Seated like a lord atop his throne, the creature began to laugh again, and as it did so, it grew increasingly warmer. Rho tried not to whimper as the heat rose, noticing dimly, as though it were happening to someone else, that while his clothes began to singe and burn, his skin did not. Not even when Krewkrie, the Unborn, Hellstrom’s homunculus, his laughter subsiding to another maniacal, insidious giggle, burst into flames before his very eyes.

Rho  and  Krewkrie  in the heart of the Crooked Palace. 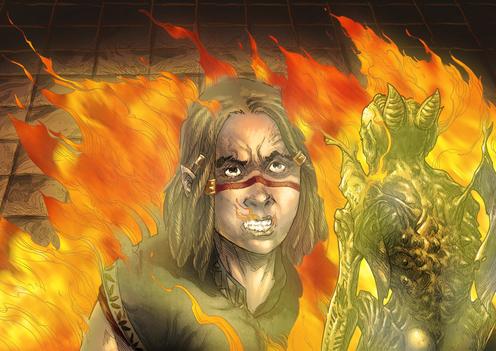