Nefyrphanx   Capital of the Northern Domains
from:

A Guide to the North: Peoples, Places and Practices of the Profane
by Estrefeth Daveandor, Taerendar, Late Crowns Period

If the Empire of the Northern Domains had a heart, it would reside in the enormous, hulking barrage of towers, fortresses, and palaces that make their home on the spires of Nefyrphanx.  Emerging from the great maw of Elthannis, the ruinous chasm which crawls in a gash over a hundred leagues long out of the Clovenmange Mountains, the great plinth of stone which the Duerkin call Nefyrphanx rises from the mists like the bulky form of one of their ancient gods seeking to escape its burial chamber.

Perhaps it was exactly this impression which prompted the Illithkin to use it as a crypt for its greatest kings.  Spanning the distance from the fissure’s edge to the massive walls of stone only on those occasions when needed to effect the entombment of one of their greatest leaders or heroes, they were the first to mar the soaring heights with mortal construction: the obelisk of Nefthra.  Before them, it is rumored that the Goaelim had molded one of their dizzying, heart-homes out of its center, tracing gravity lines on every wall so that one could enter it from any side and never truly know which direction led toward the surface.  Other legends purport that the tower had even more ancient denizens—that Ngorrl the Ravager or one of his kin had once dwelt in the depths of Elthannis, close to the heart of the world, or that the rift of Elthannis itself was the effect of some ancient battle between one of the ravagers and an opponent who had wielded the full might of the tower against it.

Whomever one might claim first scrambled upon the cliffs and outcroppings that overlook the deepest expanses of Elthannis, it is the Duerkin who first brought the Builders to that place—their giant allies who can shape stone and rock as well as any Goaelim and are descended from them.  Often called the Crooked Palace because of its towers which lean and tilt at angles that would make most humans who walk their halls dizzy, Nefyrphanx is unlike any of the many other Duerkin citadels constructed by the Builders in scale and ambition.  Even the vast citadels at Armurchor and Churynn seem small in comparison.   This is for the simple reason that Nefwirphanx is not one structure, but many.

The towers of Gargoael’s Gate lean over those who approach crossing over Elthannis on Nightsbridge, arcing from the walls of the barbican like the ribs of some vast skeleton, a classic example of Gargoael defensive construction.  The cloisters of the priestesses in the Court of Two Moons are marked by Nefthra’s obelisk, now known as the Tower of Ngzurrek, their colonnades reminiscent of any of the Illithkin temple quarters that can be found in the cities of their people elsewhere in the Domains. The walls of the Marshall’s Fortress rise in massive piles of glowering stone, quarried and transported by Mammakdur laborers, who were bred by the Duerkin long ago specifically for their brute strength.  There are many such structures, and as one journeys higher, the architectural influences jostle, and mix, in a barbaric melange of conflicting styles and discordant angles that is difficult for the civilized eye to survey, culminating in the heights of Nefyrphanx proper, and the Palace of the Lordarchs.  Here, enormous Gargoael spires arc from the brutish walls of the Duergar, and the famed Hanging Towers descend from buttresses that wind and snake precipitously from the Hierarch’s Sanctum.

All of this merely serves to remind those who worship the One and who sing the Child’s praises what comes of such practices.  After all, the Qapar Empire was built and ruled for a thousand years by the Ilfaen who were themselves originally bred from mixed Faen and Illim parentage for use in the Shadow Wars.  Winning their freedom from the ancient Houses of the Faen was a long but temporary respite only.  Even so were the tribes of the Ildur bred, from Illae and Duer for the same reasons, and of whom the Duerkin style themselves the last remaining survivors.  But in breeding and subjugating the slave race of the Mammakdur, they have perpetuated the sins of their forefathers, and like them shall also fall—whether in flames, like the Ilfaen Lords of Qapar, or beneath the swords of the righteous. 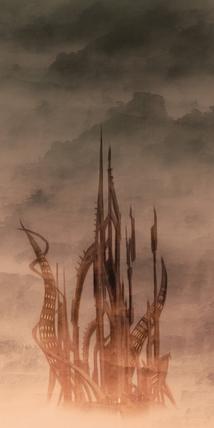