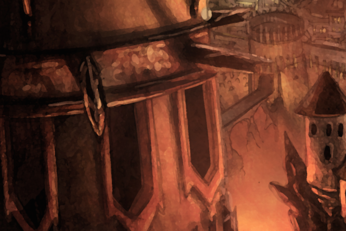 Burendim  The Free City of Mercenaries
from:


Burendim, The City Without a Country, is a city of conflict and contradictions.  Best known for its teeming population of mercenaries, who fight on both sides of the One God’s War, and for the independence it won over a hundred years ago from both contestants, some might argue against its even appearing in a volume that purports to chronicle exclusively Illithkin cities.

But independent or not, in character it remains for the most part a city of the North, having begun its life as an Illithkin city named Barkae over two thousand years ago.  A dusty town in a remote location, far away from the seacoasts or the navigable rivers on which the other major Illithkin cities lay, it was in the surrounding plains that the famed jhalor—the magnificent steeds that can run faster and longer than any other—gathered in their great herds, and the Illithkin soon learned to catch them and breed them.  And so, even when it was just a small town, it had begun to attract visitors from all across the Twelve Kingdoms.

Today, the walls of this unusually well-fortified city cluster all along the rocky bluffs which rise suddenly out of the plain, and look out across the small, brown river and the dismal lake which pools below.  Though the city has since changed its name, the lake is still called Barkae, which means ‘earth-water’ in Illithkin, for its permanently muddy cast.  Whatever the Illithkin might have once called the river, it is known to all now by its Angol name—the River Aelf.  Draining down from the Clovenmange Mountains some weeks hard ride to the north and east, the Aelf passes first through the hill country of the Downs before passing into the wide shallow basin between the two ranges, traveling through the verdant pastures beloved by jhalor that the Taermouraen call the Mark.  The namesake of the Crowns of the Mark, this place is the most sacred land to all who worship the One God, for it is the famed birthplace of the One God-worshippers’ Child of Fire, who grew up in these rolling grasslands, roamed there, seeing his visions, and finally came to prophecy the Awakening of the Sleeping God.   Once, the Duerkin were content to view all lands north of the river as separate, calling that region by its goaelim name—Orworrianwyn.  But now, in defiance of the Southerners’ claims, they too have come to see the entire river valley as one, as the jhalor herds tend to winter south of the Aelf, and now seek possession of all the lands within that area which they call simply: The Blood Plain.

It was nearly a thousand years ago that the Duerkin descended out of the far North, conquering the Illithkin cities as they came.  Within a decade they reached the small horse-trading town of Barkae and immediately saw its value.  Before this, mounted combat had been a luxury among the Duerkin—now it became a mainstay.  This tribe of unruly raiders was settling into their newfound role as the ruling class of the Northern domains, and the necessary sign of that status quickly became possession of a jhalor steed.  The warthanes of the Iron Circle, which had always been the means by which the Duerkin settled disputes among themselves and established their rule, now presided over a caste of warrior knights “As Numerous as the Stars.”   Burendim became the new name for this city—in duer, “Blade Home”—named for the lowest rank among the newly established order of Duerkin Knights, who swarmed the city’s streets, descending in masses to acquire horseflesh, and to learn the ways of horsed combat.   It was this that gave Burendim its unique character.  Indeed, one might argue that, more than an Illithkin city, it became the first—and only—identifiably Duerkin city.  For in the years that followed, competing schools of knighthood sprang up across the city, each with their own Duerkin-styled citadel.  In essence, it became a city of citadels.

Although initially sponsored by Duerkin warthanes, however, and built by the huge influx of Mammakdur laborers and Gishkil builders, the schools became associated with, and administered by, their most famous teachers—most of whom were not Duerkin.  Thus The Silver Kestrel, the school operated by the famed Angol cavalier, Dorian Blackshire and his cadre of southern knights, grew behind the walls of the massive Stone Nest, which still looms over and guards Kestrel Gate on the city’s eastern perimeter; the Reavers, a school of Illithkin origin founded by Jestaen Glannis, occupied the Horse Fort in the West.  In fact, most of what are now the most powerful and influential mercenary companies of Burendim got their start then as schools for a race of warriors seeking to learn the mysteries of fighting on horseback.

While the Duerkin were the first to introduce large numbers of Mammakdur to the city, the Southerners, charging in their masses out of the Mark, were the first to bring with them large numbers of mercenaries.  And they came from all the lands of the Illim—not just those who worshipped the One God.  For all the knights and men-at-arms who travelled from Taermourn, Angolwyn, Taerendar, and Darlian, all the turbaned paladins from Kashkar and Dazhdan, the cloaked rangers from Tournin and Ataehin, the archers from Erechyn, the centurions from Imarrin, who came because their cause was righteous, still they were outnumbered by those who came for coin.  And when the city changed hands again, the faithful might leave—but the mercenaries stayed.   Horsed raiders from Karkim and Harkanis; tribesmen from the Veiled Scimitars of Malaar;  sappers, crossbowmen and axemen from the free cities of Dormhil and Abarta; unruly companies from Danarbin and Agethard, the sun glinting from their spear-heads and helms; Tollyg and Obgoyn vykaen—traditional allies of the Duerkin—with braided beards and battle-axes—all had joined the call of the Crowns of the Mark who cried out to free the lands of the North from the pagans, lured by the prospect of gold that was proffered.

Despite the city’s impressive defenses, the first decades of the One-god’s war saw numerous exchanges as the city passed from possession by the southerners to the northerners, and then back again.  These were facilitated by the citadels themselves, and the mercenary companies which grew within them, each swearing allegiance to a different side.  It was during this period that the numerous defensive walls which now criss-cross the city and segment it into its many quarters began to rise in labyrinthine fashion throughout.  The city came to symbolize the intractable nature of the war itself, riven as it was by allegiances to various factions.  Whole neighborhoods were laid waste by the stonemagic of the Denloredyn Knights from Taermourn and Taerendar.  Others were consumed by fire from Bloodholven Warlocks.  The Decade of Dread is still remembered by the citizens of Burendim though most of them were not there to witness it themselves.  And it was this which led to the first Council of Mercenary Captains who decided to eject all contestant-aligned forces from their city, and declare independence for Burendim.  With the exception of one year during which it was taken and held by the Bloodholven Emperor Hellstrom Baen Gar, it has remained independent ever since, and is now a thriving and prosperous center of trade, its bustling economy fueled by the permanent conflict which surrounds it.

And so, like any city, its unique character is built directly upon the shifting foundations of its history.  And its history is one which has determined that its character would consequently be defined by contradiction.  After all, it first came into being as the only permanent settlement in grasslands whose only inhabitants before the Illithkin were the migratory herds of the jhalor.   It was built largely by slaves, but is most famous for its independence.   Among its multitude of walls and defensive bulwarks, there are as many which face inward as there are which face out.  Near the geographical center of a centuries-long conflict, it is the only reliably peaceful redoubt to be found in the lands called by one people the Mark, and the other the Blood Plain.  And in what is perhaps the most profound contradiction of all, it is a city which has come to know peace solely due to the efforts of a citizenry consisting largely of paid killers, who were only able to establish it by ejecting the devout servants of its most famous resident: a prophet best known for espousing love.