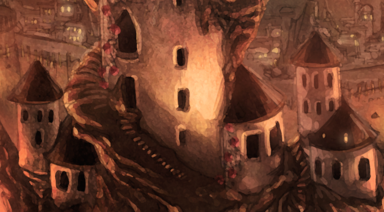 Famed as one of the most beautiful cities in all the lands—along with Taerliannon, Taerendar, and Qapar before the coming of the dragons—it is certainly the most beautiful city of those created by the Illithkin.   The City of the Gods lies at the base of the Auldrimar Hills where they meet the Ankaekaean—the lake which the Illithkin named ‘The Divine Water of the Water God’ because it is where their holy river, the Illkirrimkar, widens into a vast, crystalline pool before continuing its way northward and emptying into the Winter Sea.  Thus there are two approaches to Isfthid—by land and by water—and both enrapture the visual senses.

When approaching the city from the lake, one first sees what appears to be a mirage—an illusion of hills extending out into the lake itself.  Only as one approaches nearer does one realize that these are, in fact, the great ziggurats which were raised thousands of years ago, when the waters of Ankaekaean were more distant from the hills but that have since encroached, invading the city, and making it appear as though it were rising from the waters of the god like the bent knees of the many-limbed deity reclining in his bath.   In the summer months, the stark, white limestone bluffs of the ziggurats stand out, pure and shining, against the verdant green of the hillsides rising behind them.  But in winter, when the trees lose their leaves, and the hilltops are blanketed in white, the ziggurats reinforce the impression that the hills have moved beyond their shores, and have come wading into the water to welcome the faithful who have come to pay their regards to the gods.

Indeed, it is none other than Ankaean the Water God himself who first greets all who come over the water to enter by way of the Water God’s Gate.  Fed by two arteries of stone that extend far into the lake, the City walls meet in a great bastion.  This mammoth gatehouse is unique in all the world for several reasons, the most obvious of which being its form as the enormous likeness of Ankaean, crouching like a gigantic spider over the entrance to the city, his four arms and six legs each serving as a guard tower encircling a vast pool at its center.  His middle pair of legs and arms each rise athwart a mammoth set of gates which together serve as a lock—the largest in the world—allowing boats to enter its guarded expanse and achieve the water level of the city’s harbor which lies beyond.  Passing this second set of gates, the full majesty of the city itself greets the visitor:  distant cliffs of white limestone descend in ranks to become rolling waves covered in structures of gleaming marble.  As one glides into the water-paved ways of the sacred precincts, the ziggurats rise on all sides, none greater than that which was erected most recently—the two-hundred year old palace of the H’Tar, whose peak floats serenely above all others, surmounted by the gold-pillared Hall of the High Gods, marking the very place where it is said that Owynas Illymbur arose on the back of a great Roc and soared into heaven.

The landward approach to the Holy City follows a circuitous track through the hills, the remote, constantly changing beauty of the Pilgrim’s Pass belying its defensive utility.  It begins in spring with the burgeoning celebration of the many shades green takes, gradually ripening and ultimately achieving its full glory when the trees come into flower, a brief blaze of dazzling whites and subtle pinks that festoon the forest’s canopy.  When the blossoms drop, summer begins as the fallen petals appear to transmute into wild flowers blooming first in shades of blue, pink and purple, then changing to yellows, bright reds and white as autumn nears.  Fall steals the color from the flowers and transfers it once more to the limbs of the penitent trees above, which bow and rise as if in apology, aglow in hues of red, violet and gold.  With fall’s passing, the colors of the vizhlanai yield to that of the azerlingai, as the trees shed their luxurious mantle of color for one that is more austere.  The winds of autumn are stilled by winter which invariably arrives in the silence of a first snow that clothes the highlands in the white of Nefthra’s Night.

Whether approaching from the north or south, the Pilgrim’s Pass reaches its apex below the blunt peak of Auldrimar at the towering Pantheon Gate, where the Towers of Two Moons climb heavenward, shouldered by walls that recede into the cliffs on both sides.  Alcoves devoted to each of the twelve major deities of the Pantheon ascend on both sides of the grand portal six to a side, culminating in a monumental frieze depicting the three supreme deities of the North—Nefthra, Rlinrae, and Iern, as they are called by the Illithkin.  As one passes below the gate, horrifying gape-mouthed effigies in stone of the Durthang horde and their rulers, the Durthamonkar, stare blackly down from the arching vault as a stark reminder of the fate which awaits all those who would defy the gods—a threat made literal when one understands that the staring eyes are actually arrow slits, and that each gaping mouth lies poised to disgorge flaming naphtha on any army so unwise as to risk encroachment on the Holy City.

And thus one emerges with some relief from the great gate, eyes blinking at the sudden light which greets all visitors, shining off the mirrored expanse of Ankaekaean, the white walls of the city, and the great glittering flanks of the ziggurats which rise like spirits from the lake.   From where one first steps out into the blazing light of Isfthid, the slopes of Auldrimar tumble down sharply, its steep terraces clothed in white marble and limestone, and roofed in shingles of white-washed slate.  Gradually, the slopes begin to ripple rather than fall, becoming the lower quarters of the city which meet the waters of the Ankaekaean in broad levees designed to stay its progress.  Beyond, the sacred precincts of the city are lapped by the holy waters, whose streets and wide plazas are navigated by shallow bottomed boats that ply the ways of gods and priests and pilgrims.

Thus, while the appearance to those who approach from the lake is that of hills descending into water, the appearance to those who approach by land is that of water rising into the streets of the city.  And so does one’s first encounter with the City of the Gods indelibly imprint itself in one’s memory, a memory shaped by the contours of one’s approach to it.  But whichever impression one receives—of hills descending or waters rising—the City itself remains eternal, quiescent in the equanimity of its repose—possessing the grandeur of clouds floating above the waters, clinging to the sides of the hills, but with none of the transitory impermanence, or ephemerality of clouds.  In Isfthid alone is it given to mortals to stride, or glide, amongst clouds carved of stone, to dwell amongst the abodes of the gods themselves, a city whose very name serves as a talisman which banishes forgetting, where that which is most fleeting endures.