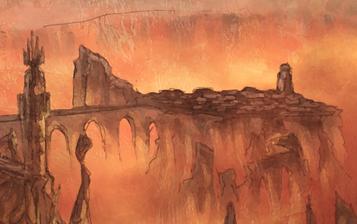 
There is an old Illithkin saying that goes something like this:  In Urthimbar, truths lie side by side like whelps sucking at a bitch’s nipple—all are fed by the same mother, but each has a different face.  The aphorism has been found to be not inaccurate.  As truths go, they are frowsy and innocent, and they have not yet been named.  Nestled together in confused patches of black and white or stumbling over each other as if still in sleep, their eyes are still closed to the world which lies beyond the boundaries of their mother’s legs.

Despite the fact that the city—home to three Dynasties of Illithkin Rule—is itself ancient (or perhaps because of it), truth is vulnerable there instead of venerable.  Reborn daily, truth remains ignorant of a world that, outside the city’s walls, would devour it. It is possible that this peculiar state of affairs in Urthimbar has something to do with the nature of the gods that have chosen to take up residence there.  Rlinrae, Chief of the city’s protectors and one of the two moon goddesses is by definition subject to constant change; ambivalence made permanent.  While Ankean, the Water God, makes his abode in Isfthid, Issaba, Mistress of the River Reeds makes hers in Urthimbar.  As pliant and shifting as her purview, she has long since come to be associated with the stylus, the writing instrument that had originally been used by the Illithkin in the days of clay tablets but has since been adapted for use with ink and parchment, making her also the goddess of writing and authorship.

It is perhaps the notorious whims of this figure in particular which contributes most to the fickle nature of truth in the city.  But then of course there is that myriad of lesser Panthea that have lay their claim to the shrines that dot Urthimbar’s insides like patches of cholera on its infected victim: there are the gods of the Dust Motes, and a god of Beer Foam; the god of Shapes Clouds Make, and another for the Shapes People See in Them.  There is the god of Temperature and one god for each position a banner makes as it flutters and snaps in the breeze.  There is a god for pebbles, and many for the visions that one sees out of the corner of one’s eye but disappear when one turns to look at them.

Whatever the effects of its divine tenants, of Urthimbar one thing only is known for certain—that many things have been said of the place and that most of them, despite their apparent contradictions, are true.  For instance, in Urthimbar, on certain days in late summer, when the sun is low and the day draws near to its close, it is said that people have seen their shadows shake themselves free from their objects to dance in the light of the dying sun.  Others maintain that it is only the shadows of stationary objects which do so, motivated out of an impatience with their originators or envy for their more fortunate, mobile cousins.  Still others claim it is the objects themselves that have no patience for stillness, that books, pots, plates and clothes which have been placed in a room in one position are often found in a different one when their owner returns.  Sometimes the objects have removed themselves to another room entirely, or mysteriously transfer themselves to the room to which their owner has moved, following him about like an obedient pet.  Furniture has been known to change its position about a room, or rooms shift location throughout a house.

Whatever the case may be with regard to these smaller objects, it is well-known that whole houses have been known to exchange places over the course of a single night, and streets to change their course or direction by endweek, making few maps of Urthimbar truly reliable.  Some oldtimers will know where certain houses are likely to be  on a particular day, while the regular frequenters of inns and taverns will always know where to find their favorite repast.  This particular feature of Urthimbar has led some to call it the City of Changing Ways, and blame the fact primarily upon the reliance of its city’s builders on timber culled from the neighboring forest of Urieth which, as a woodrealm of the Fey, is accustomed to acting of its own volition.

In fact, such suspicions are highly warranted; it is not without reason that the Illithkin are a people who build almost exclusively in mud-brick and clay, while the Derrichai are stone builders and the Mammakdur cave dwellers.  Other than the woodrealms of Urieth and, in the North, Ulfringar, there is almost no timber in the Northern Domains suitable for building. But the blame has historical roots which go as far back as the first Dynasty of Illithkin Rule in Urthimbar, to Rovenstrom who, by killing the Durthang Shyskanting, a son of Iern Madgod and the bane of the forest, won permission from the Fey spirits to remove timber from Urieth for use in building the great gates of his famous wall.  And thus has it been the practice ever since for the city leaders to enter the forest once a year with the purpose of drawing forth lumber by which its population of errant dwellings is increased.  It is for this reason also that Urthimbar wood is highly prized for the making of certain items especially pertaining to locomotion.  Wagon wheels and walking sticks, for instance, command especially high prices in Urthimbar, whereas one could never sell a fence post were it known to be made in this city.  As for Rovenstrom’s famous gate: it held fast for all his days, and never did an enemy pass it, until his last, whereupon it promptly vanished, departing to secure another Door into that World over which it is said He stands guard.